When Fernandina Beach High School Aerospace Technologies instructor, Keoki Gray, first pitched the idea of taking a couple dozen students on a three day trip to the National Flight Academy in Pensacola, he figured the price tag might prevent it from ever happening. Still, he had to try.   He knew that seeing the world’s largest simulated aircraft carrier and the one-of- a-kind training and simulated mission experience might be the final piece of the puzzle to inspire his students to pursue careers in the field. He was determined to pull it off, but he needed help. Enter the business partners!

At the foundation of all Nassau County’s career education programs is a group of industry partners that serve in an advisory capacity. In fact, these same business partners helped introduce Gray, a top flight instructor in the region, to school district administrators when they sought to open the Aerospace Technologies program just three years ago as part of the district’s expansion of STEM (Science, Technology, Engineering and Mathematics) programs. Since then, the advisory board has helped evaluate curriculum, recruit guest speakers, and host field trips. Mr. Gray’s vision of venturing to the Pensacola academy inspired some of the partners, and over the last six months they assisted in raising the money.

The Experiential Aviation Association (EAA) Chapter 943 was the first to contribute. The group’s president, Tom Piscitello, and Calista Bestor presented the program with a $3,000 donation that covered the tuition of the first 15 students. Friends of Fernandina Aviation (FOFA) added another $2,000. With a little extra help from the Nassau Education Foundation and the district’s career education and STEM budgets, the group had the means to cover the trip for not only the FBHS program, but for six Air Force ROTC students from West Nassau High School as well. 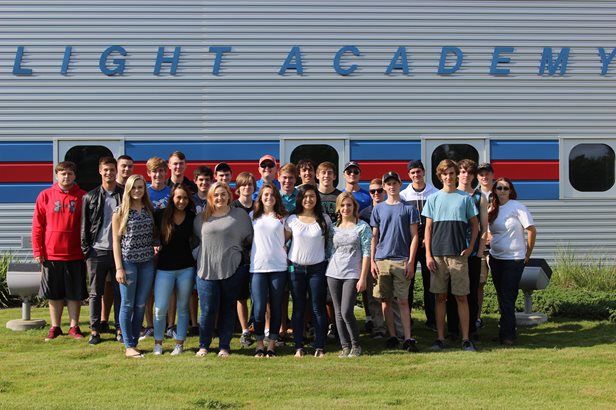 So, just what did the students experience? Gray described the program as “part summer camp, part role-playing game, part STEM classroom, and part high-tech introduction.” Students learned the science behind flight, how to map flights, how to pilot aircraft using a simulator, and the functions of air traffic controllers. Once trained, they took on roles as pilots and controllers for multiple missions. In one mission, they flew a simulated flight at 600 knots and 2000 feet, transitioned to piloting a hover using the X-12 Triad simulator, and took aerial photos. Some missions involved flying over land, flying over water, performing a touch-and- go landing, and landing on an aircraft carrier. Gray added, “Once the students checked in and stowed their gear, they broke into the Squadrons and began classes.

The three Squadrons rotated between the JIC (Joint Information Center) where they learned aerial navigation, the JOC (Joint-Operations Center) where they learned ground-to- air radio procedures and air traffic control basics, and the Hangar Bay where they operated computerized two-pilot simulators. The pace was intense. The only breaks were lunch and dinner. The Ambition Commanding Officer said they would be “drinking from the fire hose” with the amount of knowledge that was going to been thrown at them. He was right.”

When their time at the academy was over, on Friday morning the students received a guided tour of the National Museum of Naval Aviation — one of the best museums of any kind in the country. Upon return to Nassau County, Keoki Gray couldn’t be more pleased with how things turned out. “I had the privilege of working with some very good students. They were engaged and active, pushed through adversity and problems, and kept at the program long after ‘school hours’. I also saw them form bonds that I hope will last long after the weekend was over.”